Professional Employment (Prior to Seminary):

The Psychology and Confession and The Orthodox Church, 1987
The Clinical Psychological Perspectives Integrated with the Concept of the Shadow, the Person, and Spirituality, 1995
The Lord’s Prayer Illustrated: Greek & English, 1979

History of Our Church

In 1898, the first Greek immigrant, George Loukas (a tailor by trade) came to Canton, Ohio. By 1900 there were 50 Greeks in Canton. In 1909 they started thinking about building a church where they could honor their Orthodox faith and retain their Greek heritage and culture for their ever-growing families. In 1914, they purchased a lot at 6th Street and Walnut South. And 3 short years later in 1917, with a mere $60,000, they started to build their church. It was completed in two years! 1919! 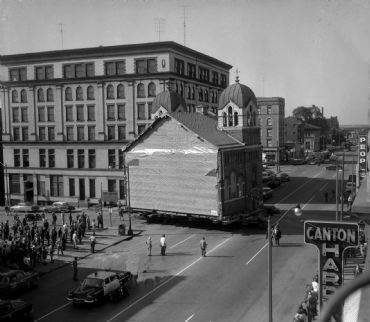 St. Haralambos was one of the many saint names placed into a hat. His name was drawn. That’s how the church was named and how St. Haralambos became the patron saint. In the 1930’s during the depression, the parishoners bought and burned the mortgage.

In the early 1940’s, major occurrences were taking place; the congregation had outgrown the church and people were moving out of the downtown area, which made the church not as centrally located as it was in the beginning.

In 1951, opportunity knocked, and the congregation purchased 10 acres of land located at 25th and Harvard NW for $22,500. The first of many building committees in the history of our church was created. They reported to the congregation that it would cost roughly $750,000 to build what they thought was needed for the future. It was not until 1957, six years later, that they got serious again about the church’s future.

There was nothing appropriate on the market at the time. The lowest bid to build what they wanted was $403,000. Also, no one wanted to leave their church behind. The Board started to explore moving the church to the property they already owned at 25th and Harvard.

Mural and Son of Cleveland Ohio had an excellent reputation for moving large structures (like huge monuments in Egypt). Nicholas J. Lesko Associates of Cleveland became the architect responsible for the expansion, the new hall, the interior finishing, the restoration of the towers and the new portico over the main entrance. These two companies were going to make it happen. It was going to cost $50,000 to actually move the church, $143,000 to remodel and restore, and $7,000 for the architect’s time and talent. The price was right at $200,000 and 92% of the congregation agreed to it!

In two months the congregation raised $100,000 going door-to-door, having teas and luncheons in their homes so they would only have to borrow $100,000 from the bank. Everybody got behind the fundraising.

Everything was going smoothly and suddenly the congregation was faced with two new obstacles:

1) The City of Canton wouldn’t issue a moving permit until everyone involved was in agreement, and

2) because it was the biggest move ever attempted in Canton, the contractor couldn’t get an insurance policy to cover the moving of the church.

Eventually everything was settled and on April 16, 1958 the Mural Company officially took over the church. They removed precious stained glass windows, removed the very heavy slate roof, removed a 16-foot section of the church, and then covered each exposed side with wood and tar paper. Any piece of furniture that was secured to the floor stayed in the two halves through the move.

It took 1 truck and 60 wheels of steel beams to make the 4-mile move. The church’s route was: Walnut S to 3rd SE to Market South then through the center of town on Tuscawaras Street, where the church angled dangerously.  The church then passed the square and proceeded all the way to 9th Street NW where it made its way onto Cleveland Ave North and then to an unpaved 30th Street NW where they had to plank the road because it had such a steep incline. Then finally onto Harvard NW, where they set the structure on a temporary foundation of railroad ties facing 25th Street NW.

Excellent weather conditions, no injuries, and only $100 in damages!

After the move it took 10 months to complete the project: 48-foot addition comfortably seating 500 parishioners, the foundation, the hall and kitchen. Another hiccup that was encountered was tha they had stopped making the bricks that had been used from the original build. To get the new center bricks to match the original bricks, they sandblasted the whole building. All was completed by March 1, 1959.

There was an amazing celebration and the church has ‘been on the move’ ever since!

If you were to tour the church, you would see that so much of it is still original:  the carving over the front door that reads:  “In church bless the Name of the Lord”, the front doors, the choir loft, the chandelier, the solea, the altar and a stained glass window behind the altar. There is only one icon that has been replaced on the icon wall. The one of our patron Saint, St. Haralambos. It was destroyed in a fire in the early 80’s but was miraculously the only item that suffered damage.

The items that have been replaced are: the pews, the pulpit, the throne, the bench, the railing, the portico and two windows behind the altar. The church has also since built a parish house that is on the grounds near the church proper. Most recently, a beautiful event center—Krassas Event Center—was added in 2010.

Who are we today? We are still a “church on the move” with a congregation of over 500 families. 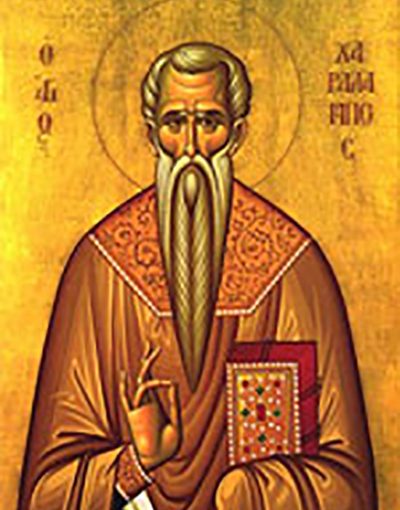 St. Haralambos was a priest in the city of Magnesia, near Smyrna in Asia Minor. Thru Christ, he was able to perform miracles much to the dismay of the government. He converted many pagans to Christianity including the daughter of Servius, the Emperor of the Roman Empire. He was 113 years old when he was martyred for the Faith. St. Haralambos guarded his people much as a shepherd would guard his flock, therefore, he is considered to be the protector of shepherds and their flocks. His body is now in the Monastery of Saint Stephen in Meterora, Greece, where it performs miracles to this day.

Kontakion: O Priest-martyr, athlete, champion Haralambos, your relics are a priceless treasure of the Church. Wherefore she rejoices, glorfying the Creator.

Dismissal Hymn: O wise Haralambos, you were proven an unshakable pillar of the church of Christ; an ever-shining lamp of the universe. You shone in the world by your martyrdom. You delivered us from the moonless night of idolatry; O blessed one. Wherefore, boldly intercede to Christ that we may be saved.

What is the Orthodox Church?

And what does it believe? 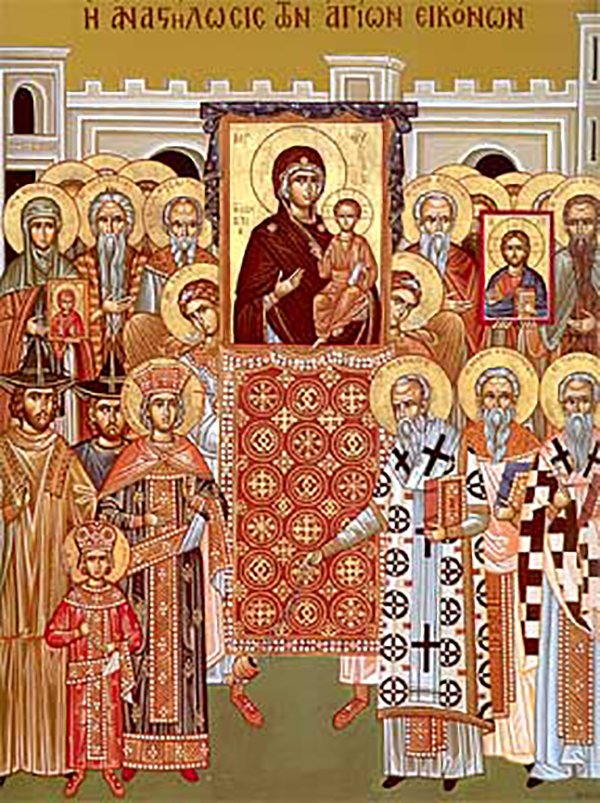 “Sometimes God sends me moments in which I am utterly at peace. In those moments I have constructed for myself a creed in which everything is clear and holy for me. Here it is: to believe that there is nothing more beautiful, more reasonable, more sympathetic, more reasonable, more courageous and more perfect than Christ: and not only is there nothing but I tell myself with jealous love that never could there be.” – Fyodor Dostoevsky

We believe as an Orthodox Church in the Creed (The Nicene Constantinopolitan Creed), which has been presented above. Close to two thousand years ago, Jesus Christ, the Son of God, came to earth and founded the Church through His apostles and disciples for the salvation of men. The teachings of the apostles and the Church spread far in the years which followed; many Churches were founded, but all were united in Faith, worship and partaking of the sacraments, also known as the Holy Mysteries of the Church.

All of these Churches are independent in their administration, yet they are in full communion with one another, with the exception of the Church of Rome, which separated in the year 1054. In Faith, doctrine, apostolic Tradition, sacraments, liturgies and services they are exactly alike. Regardless of the language of each, they exist in fellowship and together constitute and call themselves the Orthodox Church.

The Faith and doctrines of the Church can be found in the Holy Scriptures, the writings of the Church Fathers and the canons and decrees of the Seven Ecumenical Councils. We believe that the Lord Jesus Christ is truly God, the Savior, and the Son begotten of the same substance of the Father before all ages. He is also truly man, like us in all respects except sin. We believe that the Holy Spirit proceeds from the Father, this being confirmed by the Second Ecumenical Council in the words used in the Symbol of Faith: “And I believe in the Holy Spirit, the Lord, the Give of life, Who proceeds from the Father…”

The Orthodox worship God in Trinity, and honor and venerate the saints and ask their intercession before God. Of the saints, the Mother of God holds a special place because of the supreme grace and call she received from God. According to the canons of the Seventh Ecumenical Council, we venerate the sacred icons and relics not in themselves but as representations of God and the saints.

We recognize seven sacraments and consider them to be holy: Baptism, Chrismation, Holy Eucharist (Holy Communion), Confession, Ordination, Marriage and Holy Unction. Holy Baptism and Holy Chrismation (Confirmation) are the means of entrance for the Christian into the Church. For without dying to the old man and putting on the new in Holy Baptism, we cannot receive the inheritance of the Kingdom which is Christ restored to us. With Holy Chrismation, we receive the gift of the Holy Spirit. As the Spirit of God in the form of a dove alighted on Christ, we receive Him in the Holy Chrism, becoming partakers of the fullness of Christ. In the sacrament of the Holy Eucharist, we partake of the true Body and precious Blood of Christ, in the form of bread and wine, for the remission of sins and for life eternal. As it is written: “Except ye eat of the flesh of the Son of Man and drink His Blood, he have not life in you.” In Holy Confession we receive forgiveness of the sins we commit after Holy Baptism if we truly repent of them. The foregoing three sacraments are essential for the life of all Christians.

In regards to Holy Ordination: by the laying-on of hands of a canonical bishop, divine grace descends upon him who is being ordained. This basic sacrament has provided uninterrupted succession to the Orthodox clergy from the holy apostles and the establishment of the Church on the day of Pentecost. Divine grace sanctifies the union of two people in Holy Matrimony as Christ blessed the wedding at Cana by His presence and performance of His first public miracle. Infirmities of the body and soul are healed through the sacrament of Holy Unction.

These, briefly, are some characteristics of the beliefs of the Holy Orthodox Church. The Church is one because our Lord Jesus Christ founded only one Church. It is holy through the sanctification of its Founder and Head, Jesus Christ, and the operation of the Holy Spirit. It is catholic in that it is universal, and knows no limitations of place or time. It is apostolic because it was founded by the holy apostles. This is the Holy Orthodox Church – the One, Holy Catholic and Apostolic Church, we all love and witness!

May the Lord Our God, guide us and watch over us all with His peace, and His love, as well as help us, save us, and keep us by His grace.

Let us love, confess, and live our Holy Orthodox Faith!

GLORY BE TO GOD FOR ALL THINGS!